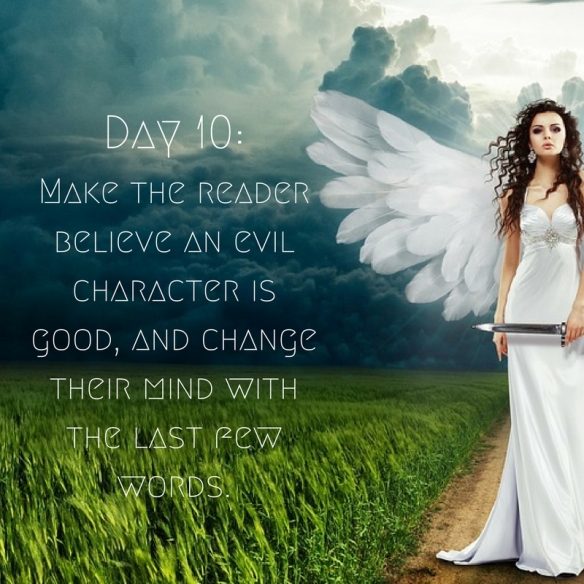 Day 10 of 365 Days of Writing Prompts: Make the reader believe an evil character is good, and change their mind with the last few words.

Erin: Marrying a chef was undoubtedly one of the best decisions I ever made in my life. When we were first dating that didn’t cross my mind. He was just a kind, funny and inspiring human being. That was all I thought I needed, but once I got a taste of what someone taking care of me felt like I was hooked. His food was like a mother’s hug and he never failed to have the table sprawled in warmth when I arrived home.

On special occasions like our anniversary he would decorate the dining room like he had that night. He knew how to get me and nothing turned me on quite like the smell of caramelized onions or simmering garlic. Our breath was an afterthought when my stomach was full. “Welcome home,” he placed chicken nuggets on the table.

That’s how I knew he loved me. I knew he had every reason to be too good for my favorite food, but he cooked it anyway. He was too good for a lot of what I brought to the table, but he never alluded to that fact once. “Ugh, I can’t say I love you enough,” I hugged him and reached around him to steal a nugget while he drew me in tight.

I bit into the ecstasy and couldn’t tell where my pleasure from his touch and the food separated. He spiced it up. My throat was taken off guard, “what’s the new ingredient.

“I added peanuts to the breading,” he hugged me even tighter.

“I’m allergic,” I tried to open my increasingly closing throat.

That caused his grip to loosen, “Darling,” he took a step back and placed his hands on my shoulders, “I know.”

Shannon: “So close this time, but again you’re too late, and you suck again. Guess you’ll have to try again next year,” Dean shrugged before slamming the door in my face.

“Why do you always sabotage my chance? Why do you hate me,” I yelled, finally letting go of the anger I had built up against him for holding me back for so many years. I was ready to move on to the next level but as long as he was on the testing committee I wasn’t going anywhere.

“Sabotage your chance,” he mocked me with a laugh as he opened the door. “In what way have I done that,” he questioned in his usual snake-like tone.

I clenched my jaw, and shook my head. Where to begin, “I don’t know, maybe when you gave me different directions than everyone else to lead me off track. Then there was the time you drugged my meal with a hallucinatory pill, getting me disqualified. Oh wait, or how about when you gave me a clue in a language spoken by an isolated island population. A form communication that wasn’t widely documented until after competition. You gave me that clue on purpose. It was your choice,” I wanted him to own up to it.

His mouth curled. “Why don’t you give up if you are so sure I’m out to get you?”

“Because than you win,” I felt my voice crack. “Than you’ll have succeeded in breaking me.” I held my tears back so I could remind him, “But I won’t ever let you.”

He nodded his head slowly, staring at me with more fear and emotion than he’d ever shown before. “I know,” he breathed out, “And I admire you for your determination.” He put his hand out in the first peaceful gesture he’d offered since I met him. I was reluctant, but eventually gave in and shook his hand. He moved in closer to pat my back at the same time. “You don’t want to win,” he whispered almost inaudibly, so the cameras couldn’t pick up on what he was saying. He spoke out loud again as he leaned back to avoid causing suspicion. “I’ll never forgive myself if you ever make it past that door,” he smirked for the viewers, but the look in his eyes told a different story.

Evil or good is subjective most of the time. Not today… make it black and then white.