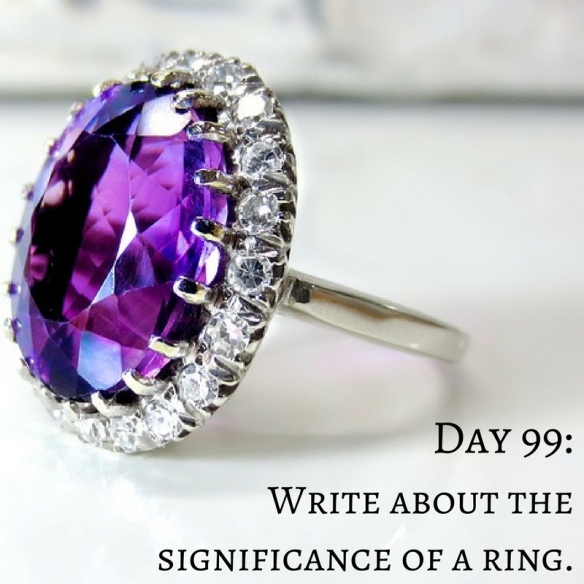 Day 99 of 365 Days of Writing Prompts: Write about the significance of a ring.

Erin: “I need that ring,” I started shaking as I yelled at my friend.

“It’s just a piece of jewelry,” she complained being completely insensitive.

“What do you mean it’s more than that?”

“My grandmother left me that ring. It’s all I have of her,” a tear dropped from my eye.

“I didn’t know,” she sighed. “We’ll find it,” she started shaking around the sand next to our towels.

“It’s probably in the ocean,” I whined plopping down onto the towel.

“Maybe, but maybe not. We won’t know until we try.” She continued to scrounge around the sand. “But also, if we don’t, it’s not all you have of her. I knew your nana. You have her fire in yourself. You’ll never lose that.”

“Yeah,” I questioned more than agreed.

“Yes, so prove it and let’s find this dang ring you claim to care about so much,” she nearly screamed.

She was right, what would Gram think of me if I gave up so easily?

Shannon: “I should take it off, shouldn’t I,” I asked Molly as I twisted the rose gold arrow ring around my finger. I liked fidgeting with it whenever I was nervous. I found it comforting. What would calm me if my hand was completely bare?

She looked at my finger. “I don’t know. It’s complicated. Maybe you could move it to a different finger. Show Dave that your ready to move on.”

“I don’t if that’s enough for him or me. If I put it on my other hand or a different finger it’s a division, and I don’t want him to feel like I’m dividing my love. It’s his now. He doesn’t say anything, but I think this is what he’s been waiting for.”

“If it makes you feel better you can take it off, but don’t do it because you think you have to. You used to say it kept him alive. If that’s what it means to you, if it holds his memory, you can still wear it,” she tried to convince me to change my mind.

His name was Eric and we both grew up with him. He was our friend, and in high school he became my boyfriend. He died in a crash a year after we started dating. It felt like I lost a piece of me, and the only thing I had left of him was some pictures and the ring he gave me for my birthday. Since that day, I’d managed to never take it off. Like a security blanket, as long as I had the ring on it felt like his ghost was watching over me.

I closed my eyes and reconsidered. Was I actually ready? I breathed in and out, and felt my hand easing the ring off my finger until it was no longer connected to me. He deserved to be free too.

“How do you feel,” Molly questioned.

I pressed my lips together then opened my eyes. “Scared,” I answered honestly.

Make an object more than an object.