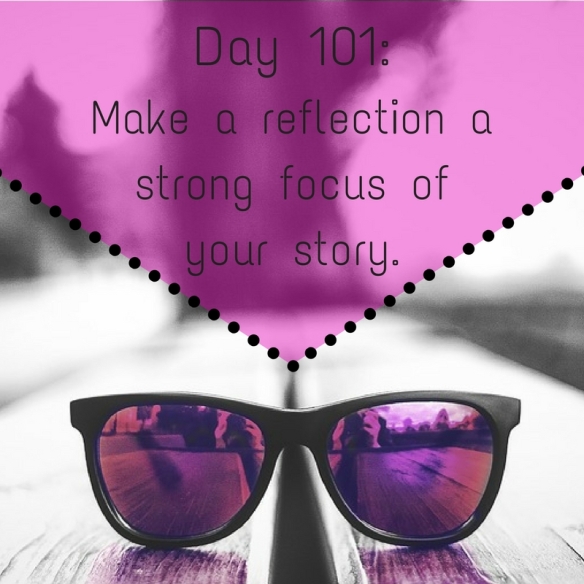 Day 101 of 365 Days of Writing Prompts: Make a reflection a strong focus of your story.

Erin: The day I looked in the mirror and my reflection stopped mimicking me I was inspired. To be honest at first I was scared, but in the end I was inspired. When my reflection no longer had a hold on me, why should society? It couldn’t nor should it. I was done following the rules, I was going to make them.

Shannon: “The mirrors in this shop do not reflect the image you expect to see. They’ve each been enchanted with a blessing or curse, but how it is perceived is, as most things, dependent on the eye of the beholder. Some prefer to explore alone as a friend’s wondering eyes may see a reflection you despise. Good luck dearies. I hope you like what you see, but even if you don’t that doesn’t necessarily mean the mirror still wouldn’t be of good use to you.  Everything on this floor is for sale and if you have any questions I’ll know, and I’ll be around. After all, your reflection is everywhere,” the older women gestured to the walls with a wink. It was our first time in her shop, so she had to give us the whole spiel.

Sam led me to a table of mirrors that caught her attention. “They’re probably all just a bunch of carnival mirrors,” she whispered. “They had to find some ploy to attract some business,” she speculated as she picked up a compact mirror from the table and struggled to open it.

“Well I guess we’ll see,” I joked, pointing to mirror behind my head, and then I turned around pretending to sneak up on it. Nothing out of the ordinary appeared and I was starting to think Sam was right. Maybe the store really was a bunch of self-built hype. Then I saw some green movement behind me. I peaked over my shoulder, but nothing was there. When I looked back at my reflection weeds were engulfing my body. They looked like they were trying to strangle every inch of me, but I didn’t feel anything. I held out my arm. “What does it mean,” I whispered.

“I come believe this mirror knows about secrets,” the shop owner was suddenly standing beside me, and I some how managed not to jump. “Every time I saw my reflection it had a shadow behind me, and I knew something was lurking in my life. I told my most treasured secret and that same day the shadow in the mirror disappeared. Now maybe I did something else that I don’t remember, but that’s my theory,” she shrugged.

“You might be right,” I nodded, pretty certain it wasn’t just a gut feeling that made her prediction resonate with me.

“Ugh,” Sam interrupted with a loud moan, clearly not overhearing our conversation. “I know I’m not perfect, but I am not that ugly,” she shoved compact back down and quickly inspected herself in another wall mirror. She sighed in relief, “Thank goodness.”

“Do I want to know your theory on that one,” I questioned the woman.

She let out a quiet laugh. “Truth is you probably already know.”

What’s does your story reflect?