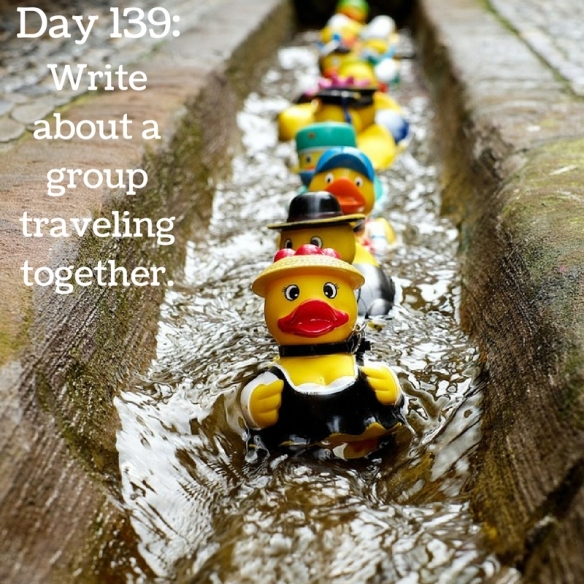 Day 139 of 365 Days of Writing Prompts: Write about a group traveling together.

“I know,” my sister agreed.

The RV was starting to make me claustrophobic. Too many family members in one place lead to be slowly being driven to insanity. “I’m hungry,” my cousin started grumbling.

“We just went a buffet,” I reminded.

“I only had two plates,” he argued and I scoffed.

“Can’t you give us the back room alone for two minutes?”

“You already had your two minutes. I need time away from my mom too.”

We all needed time away from everyone. When there was clunking sound and we rolled to a stop I feared that was not going to be a reality for a long while.

Shannon: When I was younger I used to wonder what it was like to travel with the cast of a musical, now years later I finally landed myself a spot on a tour, and I’m living out my fantasy. We spend a lot of time in buses, planes, and hotel rooms always flocking together in one big herd. I like traveling with the group, it reminds me of school field trips. The way they can make you feel small, yet important at the same time. Considering you can get lost so easily exploring, but no one would ever let you get left behind.

We are familiar with each other, and know everyone’s name, but we break off into our own family-like subgroups, because you need close friend when you’re on the road. They’re temporary family you can take with you. My group is the dancer-focused singers. We were never good enough to make it on dancing alone, but we pass as multi-talented background. It’s nice to be around people who understand you, and that you can share life experiences with. I wish I could do this job for the rest of my life.

Write about a group that travels in a pack.