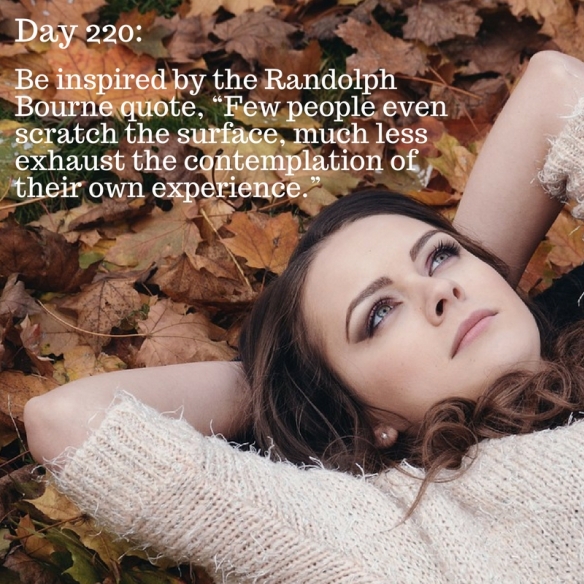 Day 220 of 365 Days of Writing Prompts: Be inspired by the Randolph Bourne quote, “Few people even scratch the surface, much less exhaust the contemplation of their own experience.”

Shannon: Sometimes I catch myself feeling bad for flies. Sure they’re annoying, but they can be squished in a matter of seconds and their life is over. What kind of existence is that? Then I realize that mine isn’t so different. We just have different threats. I could die any moment in some freak accident, and what will my life have meant to anyone but myself? Maybe all we can hope for on this Earth is that our lives will be memorable than our deaths.

Erin: Sometimes I like to just do absolutely nothing, but think about my life. It’s a tricky balance though. As I get to thinking, I think about how I’m using my time. Then as I think about my time, I think about how my nothing sessions might be a waste. I haven’t decided yet. I’m only going to have decided the value of the time when it is too late and I guess I have no choice but to be okay with that.

Read other’s quotes then make your own quotes.