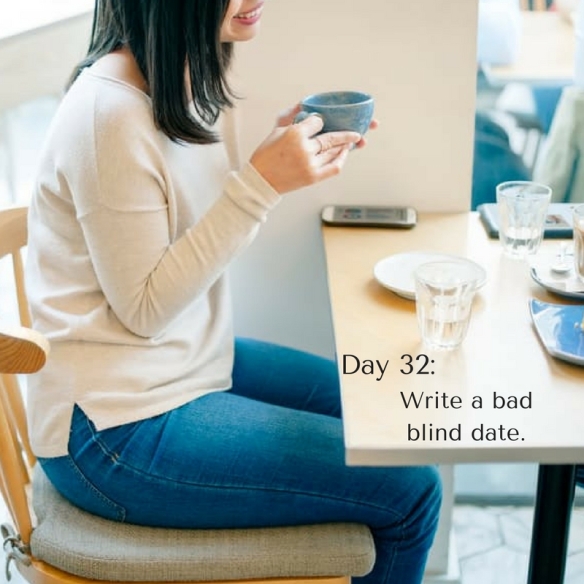 Shannon: “Lance,” I questioned the guy sitting alone, since his face matched the picture my friend had showed me earlier.

“Yes,” he got up to shake my hand. “You must be Ellie,” he stated and I nodded. “I hope you’re ready for the greatest date of your life,” he said as he pulled out my chair.

“We are just having dinner. Isn’t that a little cocky.” I felt the need to call him out, hoping he was joking.

“Dinner with me,” he flashed his teeth as he opened his menu. “Plus Mindy tells me you don’t get out much, so this should be a real treat for you.”

Ok, those were fighting words. “Excuse me, but do you think you’re doing me a favor by eating with me,” I questioned, baffled.

“No, I’m the lucky one here,” he spoke sarcastically.

Jeez he was coming on strong even though we’d just met. I tried to think back to what I could have said that made him act so awful as the waitress came around. “Are you ready to order,” she asked.

“Yes,” he responded, knowing I hadn’t even opened the menu yet. I tried to scan it quickly, but I needed more than one quick read, because each dish was very complicated.

“And for you,” the waitress questioned my silence.

I felt too much pressure to come up with one on the spot. “What do you recommend?”

“Just get her the house salad,” he ordered for me.

“No,” I argued immediately.

“Come on,” he rolled his eyes, impatiently.

“I’d like to leave,” I picked up my purse aggressively. “Have a great dinner Lance. Oh,” I paused, “And this was the worst date of my life by the way.” It felt amazing to walk away.

Erin: “Hello, I’m Lil,” I shook the hand of the short man I recognized from my friend’s text. He had dark hair and the darkest brown eyes I have ever seen.

“I’m Ronald,” he scanned his eyes to the handshake and immediately sat down in his own chair.

“Nice to meet you,” I offered.

“Yeah,” was his only response, so I took a drink of the water in front of me to slightly block my face from him.

He buried his face in his menu.

I picked what I wanted and his noes was still buried. “What do you like to do,” I asked drinking more water.

“Play sports and watch them,” he shrugged getting back to his menu.

“I’ve never been that into sports,” I admitted. “What else do you like to do?”

“Have you ever tried sports?”

“This would be easier if you played,” he stilled had those dark brown eyes glued to the menu. They had actually not met mine the entire date.

The waitress came to the table and he ordered his salmon with seven adjustments to make the meal fit his liking. I picked a last-minute salad as what I initially wanted clearly would not meet his expectations. “There is a lot of sugar in that vinaigrette,” he pointed out.

“Darn,” I breathed out reminding myself that he was not worth it.

“Playing sports is a good way to stay in shape,” he offered some unsolicited advice.

“You should go to the gym with me,” was his second date offer and our food was not even on the table.

“It wouldn’t hurt,” the sag in his eyes while he looked to my stomach proved he was not joking around.

“I need to leave. I don’t need this type of energy in my life. Try to enjoy your bland ass fish,” I stood up.

“I’m not paying for you if your cutting out,” he complained.

“This will cover it,” I threw a $100 bill on the table. While he didn’t deserve the extra money, I figured that amount of money coming from a homely woman put on this planet to please his eyes was something he could stand to see.

We have surpassed a month!!!