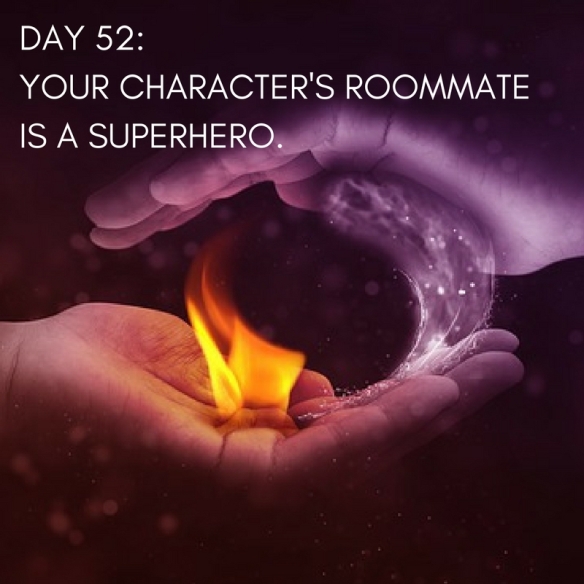 Day 52 of 365 Days of Writing Prompts: Your character’s roommate is a superhero.

Erin: “It’s time you started pulling your weight around here,” I snapped doing the dishes for the third Friday in a row.

“Excuse me, saving the campus from a mass shooting is not pulling my weight,” Rex snapped taking off his jeans that had some sort of blue liquid spilled on them.

“That was weeks ago, and news flash you’re not the only one with a job,” I threw the drying towel on the counter to storm out.

“Being a super hero is not a job,” Rex insisted.

“Next time you’re in danger don’t be surprised if I am too busy with chores to save you,” he growled.

“Like anyone cares enough about me to try and hurt me,” I shouted.

“I do,” I heard just before I placed my headphones on.

Shannon: I opened the door to my soot and blood covered roommate, Ray. It looked like he was in an explosion again. He quickly slid past me without saying a word. I looked outside and waved to a neighbor who was still staring. She was always giving us a questioning look. I thought I might as well help for once. I was working on a good lie for a while now, “Actors,” I huffed. “Never wants to break character no matter how crazy he looks,” I rolled my eyes but when I focused again all I got was an eyebrow raise before she turned back to her door.

I went back inside and found Ray raiding the fridge. “So how was your day,” I questioned.

“Eventful as always,” Ray smiled, before he started chugging the milk out of the container. I was hoping the gallon could last longer than a day, but maybe it was time to get separate jugs.

“So did you get the bad guy,” I asked, waiting for something good.

“No bad guy this time, just a building explosion. I saved a few workers who were trapped inside.

“Do you know what caused the explosion,” I pried.

He shook his head, with an armful of food, as he finally closed the fridge door. “I didn’t hear anything yet, but we should probably turn on the news.”

“So that doesn’t leave out the possibility of a bad guy. You just didn’t see him,” I grabbed the remote, clicking on the T.V. simultaneously.

“Why do you always want it to be a bad guy? That’s never easy on me,” he complained.

“Exactly but you always find a way to defeat him, or her, and it often involves you needing some help from me. It’s boring to just hear stories all the time. I want to be a part of the action. I want stories of my own,” I explained flipping for a station that was covering the accident.

“Stories that you can never tell anyone?” He walked in the living room and plopped down on the coach. Another thing I’d be cleaning later.

“Yeah, and I’ve kept good on that promise,” I pointed back at him. “No one but me knows about you, or about the time when we kicked you-know-who’s ass,” I clenched my fist, getting hyped by the memory as I turned my head back to the screen. “I just like knowing that I’m capable of helping save the day. No matter who knows.” I finally landed on the right channel.

“They’re not ruling out foul play,” I cheered, and he moaned.

Your character is living with a legend, how do you imagine that will go?