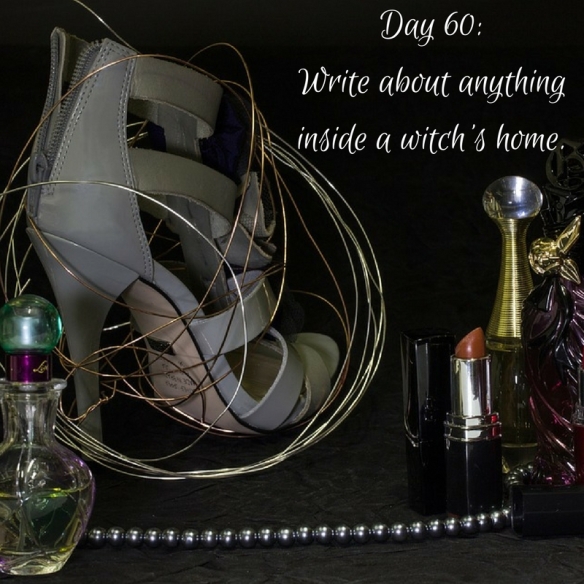 Day 60 of 365 Days of Writing Prompts: Write about anything inside a witch’s home.

Erin: In the corner of Ophelia’s spell room there was a water cooler. It seemed so mundane compared to all of the other glittering and ancient trinkets otherwise overcoming the space. Even atop the water cooler was a crystal bowl full of gold leaf flakes. But underneath the precious topper was just the old beat up water cooler. She found the equipment in a thrift shop and knew it was the last thing she needed for her work. She understood the plastic heap would be an outlier and eyesore, but she also understood it would be used. And it was used, she touched that water cooler every hour in doing her spells, which she could not say about a single other thing in the room. Just because the water cooler was not the first thing visitors noticed, did not mean it’s presence and impact was not the most influential of them all.

Shannon: I couldn’t imagine that my bathroom cabinet was like any of the other girls at school, or my house for that matter. Maybe that’s why I could never seem to relate to any of them. I always felt like I was from a different world, and found myself having to be extremely careful about never revealing too much to the outside world.

My makeup collection might have appeared normal, but the ingredients were a homemade concoction. For example, my under eye cream contained children’s tears and a mixture of other natural but hard-to-come-by ingredients. There was actually no pigment to at all, because this stuff didn’t cheat. This was true color correction and a face-lift in a bottle. Not that I needed too much yet, but as my mother would say, it never hurts to freeze time.

Each bottle in my nail polish collection contains a drop of fairy blood, don’t worry we don’t hurt them. We exchange them some very sought after valuables for the tiny vials. We’re not all wicked. The magical power goes a long way. There’s enough power in one drop to sway the world in your favor, or more accurately the whole school.

Then there is the mascara. Contaminated with the powder of black petals from flowers in our garden, which are grown under some very particular conditions. The mixture not only fills in natural full lashes within seconds, but also gives the eyes a hypnotizing power. Just a few blinks and I have the power to get almost anyone to do what I want. Not that I talk advantage of these products…too often.

One detail in the setting can sometimes be more important than all of the others put together.