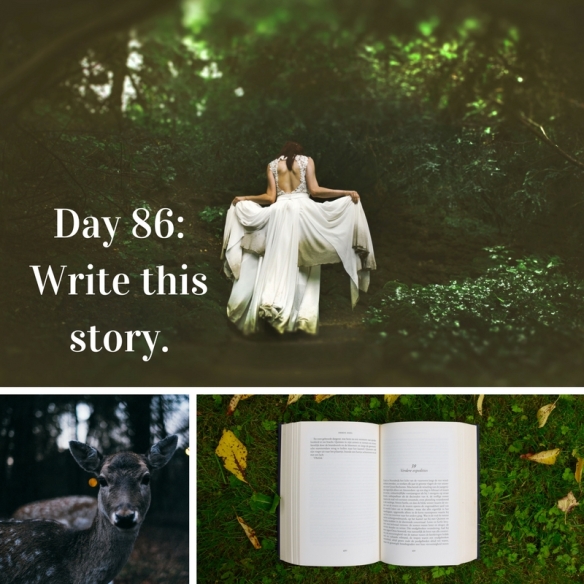 Day 86 of 365 Days of Writing Prompts: Write the story of these pictures.

Shannon: They put me in this delicate white dress. The top was shaped together with an overlay of lace to add intricate detail to a simple bodice that was already built to flatter my figure.  The skirt was a waterfall of fabric, each piece draping gracefully over another. To top it off my makeup was a flawless clearing of every imperfection.

I looked in the mirror as they worked on my hair. “You could win. You made it this far, and it’s a great scholarship prize. You must be excited,” my hairstylist commented. “I never thought I’d see a newbie get this far.”

“Yeah, this is kind of a crazy competition, but I could use the money,” I tried to believe what I was saying, but I didn’t actually want to win. I was not the kind of person who got all dolled up like this for anything, especially not to win money, or gain approval from other people. Would winning mean my motivations were no different from any of the girls here, or would I just be smart for giving in to what the world wanted from me?

As I was walking to get in line to go on stage I caught sight of some movement outside. Maybe because that was where I really wanted to be. Either way, I was surprised as I focused my vision on a baby deer peaking inside. My parents owned some woods behind our house, and I was fascinated by nature. Even more fascinated when the nature took interest in humans. Then I did something stupid. I went after it, not forgetting about the competition, but instead I was just blowing it off.

I wanted to care. I wanted to turn myself around, but the deer still wasn’t running, and I felt no guilt. I opened the door slowly enough for it to back away, but it didn’t bolt immediately. I tried to reach out for it, but it flinched and started slowly walking back into the wooded area it came from. I followed, as if the silent creature was guiding me like a dog.

The bottom of my skirt was turning brown from the dirt path, so I started carrying it. I felt like Cinderella running from the ball. Finally the deer stopped by a large rock and just stared. “Creepy,” I whispered, but figured it wanted me to find something so I looked around, a little afraid of what I might find.

Suddenly I saw a patch of white underneath some tall grass and leaves. As I reached down to pick it up I discovered it was journal, and that the handwriting was still legible. When I looked up the deer was gone.

Erin: “What is this,” my fiancée asked stealing away my manuscript.

“About what,” he continued to prod.

“A wedding in the woods,” I offered.

“What’s the conflict,” he refused to take my simple answer.

“The deer are trying to convince the princess she deserves better than the man she is marrying,” I ripped the pages back and looked down to my desk.

“Does she still marry him,” he asked.

“They leave the woods, because the support from the community is nonexistent. Once she gets far enough away though she realizes her feelings are not dictated by the community, but she genuinely feels she can do better as well,” I cleared my throat before looking at him. His expression had sank.

How will these pictures fit together for you?