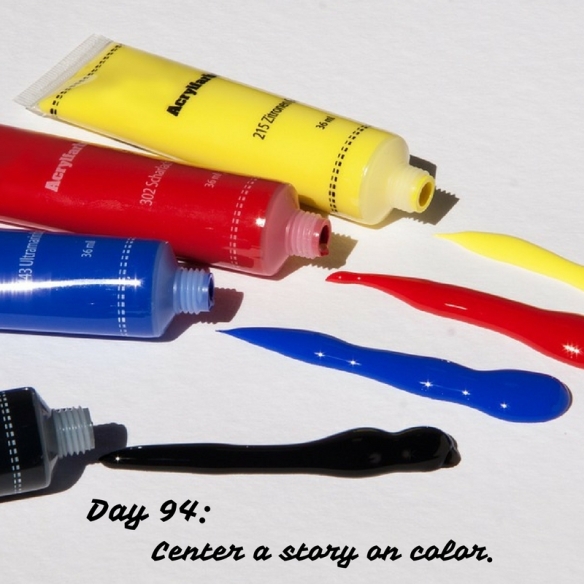 Shannon: Black was the first thing I saw, the absence of anything distinguishable. Then with a few blinks the world around me appeared again in multiple shades of gray. I kept blinking waiting for the color to return. Still gray.

There was something wrong, not only with my vision but I couldn’t feel anything. I wasn’t even sure if I could move, but I was sitting up straight, so maybe I regaining control. Red, finally I saw the familiar color. I titled my head enough to see that I was strapped into the chair with red zip ties. Oddly, no other colors returned. I looked around. Everything red stood out like an accent. It was like a photoshopped picture in real life.

“What are you seeing,” a woman with glasses and a tablet sat in the chair in front of me. Suddenly the red clicked off, and I honestly answered, “Gray and blue.” Color was all I cared about.

“Perfect, it’s working,” she smiled. “Did you see any other colors before I came into the room?”

“Why am I here? Then I’ll tell you,” I had one piece of leverage, as far as far I knew.

“It’s nothing bad. It’s just hard to get wiling volunteers when their vision is at risk. It’s completely safe, but people get nervous about the needles. That’s why we needed to knock you out.”

“It’s best not to ask about details,” she interrupted. “What color do you see now?”

“Yes, after we know all the side effects. Then we’ll never bug you again, and if everything works your world will be more beautiful than you can even imagine.”

Yellow, she changed the color again. I got the feeling either my eyes were giving me away, or her technology had access to my view. “What does that mean?”

“I have this theory that there are colors on this planet we can’t see. I’m trying to tap into them, and you’re my first guinea pig. What color do you see now,” she tapped the controls and looked up to stare with a reluctant squint.

Erin: The problem with the genetic modifications that I had the most issue with was my new eyes. The eyes were already pretty open windows to the soul. When they changed our genetic makeup to color-change with our moods the windows were not only open, but screamed the truth.

When my eyes turned black on my one year anniversary date with Jape, I lost someone who most days I felt very close to. I was grounded for my eyes turning purple. When my eyes turned pink in gym class I was mocked to a level not previously reached. Our government has taken away our most intimate privacy, our feelings.