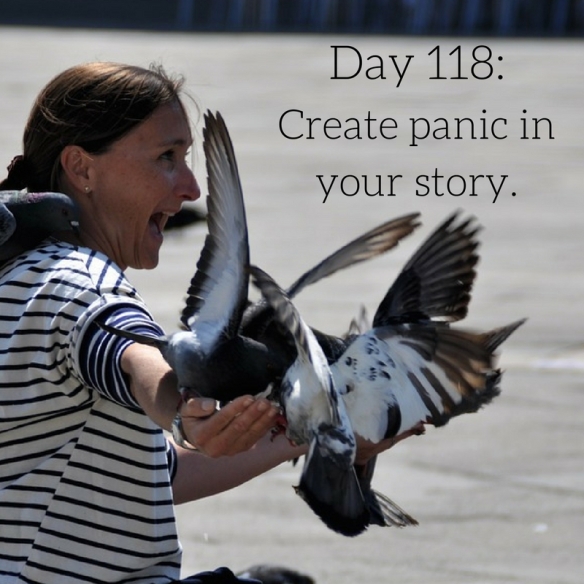 Day 118 of 365 Days of Writing Prompts: Create panic in your story.

Shannon: “It’s a fake school skeleton he could have been a teacher or something else,” I pointed out since Mark made such big deal out of it.

“Or he made it look like a fake skeleton,” Mark was stretching it.

“Oh yeah, I’m sure he could make it look that clean,” I pointed to the flawless bones.

“Whatever,” he rolled his eyes before shutting the door. “It’s still creepy to keep something like this in the closet.”

“It freaked me out,” Ally shrugged.

I was about to scowl at her, but suddenly the lights turned off. “What’s going on,” Pete questioned, sounding as nervous as I felt.

“Did you lock the door,” Mark whispered to Jim.

“Yes,” he quickly replied. “Maybe they turned off his power,” he tried to come up with a less terrifying reason.

Within a second Mark’s phone light went off and it was pitch black. “Mark come on, turn it back on,” Ally demanded impatiently.

“Its dead or something. I can’t turn it back on. Does someone else have a phone?”

I pulled out mine to test it out along with everyone else. “Shit,” I heard Ally’s voice starting to crack. “It’s dead.”

“Mine too,” I added, freaking out since it was fully charged 15 minutes ago. I hoped Pete or Jim would save the day, but they both had the same problem. “It’s time to go,” I stated out loud, afraid to go off alone.

A blue glow appeared and it was almost worse than the dark. The light was located in a room we hadn’t explored yet, so we were only illuminated by a dull glow. I was afraid to look past the familiar faces, thinking a new one could have appeared in the darkness. A record player started playing a chilling song, and no one had to say anything this time. We all had the same idea as we ran for the door.

Erin: Snap out of it. I could do it, I knew a lot about starting a small business. I didn’t need to be a great public speaker to help people with that.

“It all started when I hurt my,” in the middle of my “how I knew I needed my own business” story there was a loud screeching.

What’s the uproar about?