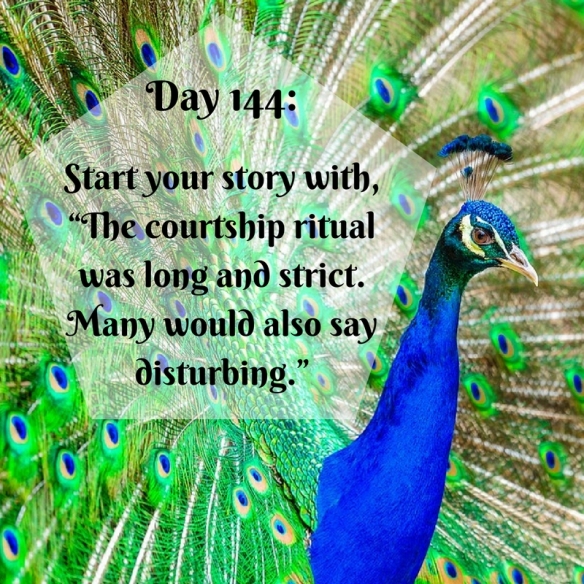 Day 144 of 365 Days of Writing Prompts: Start your story with, “The courtship ritual was long and strict. Many would also say disturbing.”

Shannon: The courtship ritual was long and strict. Many would also say disturbing. The process started with the couple creating a fire together, as if they were competing to prove they were capable of survival with only the tools nature could provide them. Family and friends would watch as they struggled with the first step for hours on end. Sadly giving up wasn’t an opportunity to come back later and try again when they were ready. It was giving up on the relationship forever. Their partnership wasn’t mean to be as far as the community was concerned.

Either way it always ended in a dramatic finale with the couple either getting unwillingly torn apart, or they’d moved on to the next step in the process: branding.

Erin: The courtship ritual was long and strict. Many would also say disturbing. The men were entered into a pit at random. They had no choice of which one nor if they wanted to participate. The prize woman watched from above, not able to hear any of the conversations. She witnessed the interaction of the 30 suiters. Every three days she eliminated one man based on the number tattooed on their back. They were allowed to try to woo the woman in the sky by any way they saw fit.

The first elimination was sent to the most “undesirable” bachelorette. The farther in the competition a man got, the more impressive the score of the woman’s pit he would be sent to. There were some men who got stuck in the final pit for lifetimes, until a self-sacrificing bachelorette would pick them so they could die in peace.