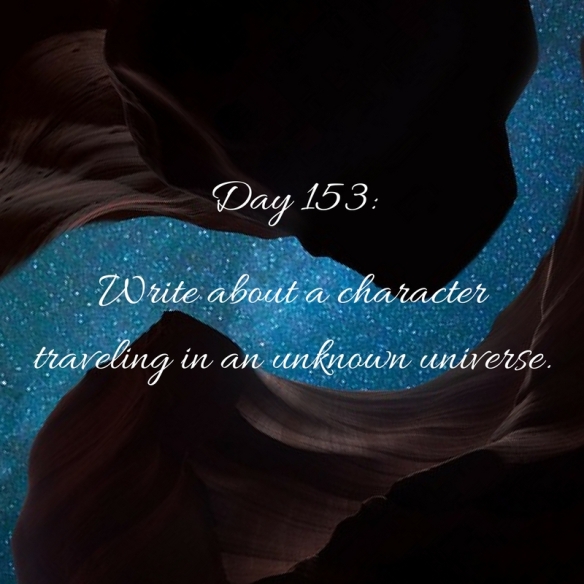 Day 155 of 365 Days of Writing Prompts: Write about a character traveling in an unknown universe.

Erin: No one told me that the experimental rocket ball was going to be shot straight out of our universe. The one I was in now had an atmosphere more reminiscent of water than a gas, only more gelatinous. The goo had a purple tinge. There was little planet like squares every mile or so. All the sudden out of nowhere I was flipped upside down and could not steer the ship at all to get it flipped back up. I was starting to feel the blood rush to my head, but that was not my major concern. My number one worry was that I was not the only creature in this universe.

Shannon: From the helicopter I could see the ground was divided into sections of color, instead of objects. It looked like a completed trivial pursuit game piece with all the colors meeting at the center, and the separation line wasn’t jagged. It was a perfectly straight divide, and I didn’t know how it was possible. I was flying over the blue zone into the purple one as a felt a little turbulence and the color of the sky and clouds completely change to purple as well. It was as if each zone was protected by it’s own little dome. I wanted a closer look and I saw an open field for me to land just on the outskirts of the town. Hopefully its inhabitants were friendly.

I stepped out cautiously, expecting an angry crowd to have heard or seen my arrival. “Hey you can’t…” a man’s voice yelled from a distance and I couldn’t yet make out where he was coming from. Suddenly in a flash he was right in front of me, and I couldn’t stop myself from flinching. “What are you?” he questioned, examining my appearance as I examined his. He looked human, but his skin was covered in sliver scales that sparkled like glitter. His eyes were an intense purple, and his hair was a darker shade. All of his clothes were violet too. I watched his plum colored eyebrows lower as I felt his impatience with my lack of response.

“I’m a human and I’m lost,” I explained, confused by how we could speak the same language if he didn’t know what I was.

He looked shocked. “Seriously,” a smile lit up his face.

Bring your character out of this world.