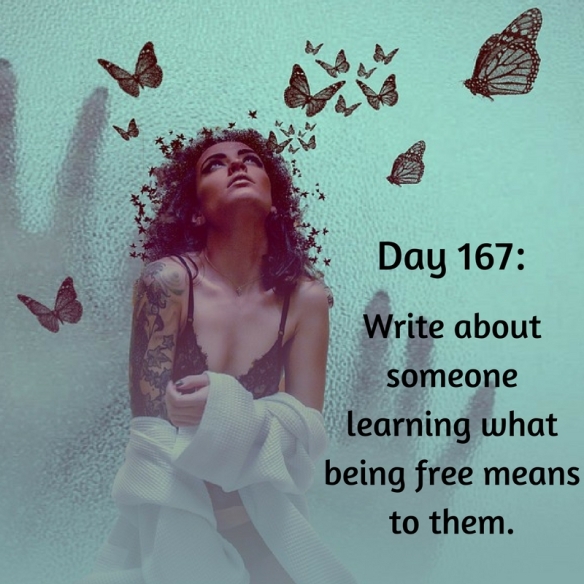 Day 167 of 365 Days of Writing Prompts: Write about someone learning what being free means to them.

Erin: My initial reaction to falling in love with her was to push back. I didn’t want to be tied down, or restricted, or put someone else’s needs above my own. So, I decided to quit her. In attempting that I realized I had chosen my own prison. Loving her was secure, and worry free. In a room with her I was more myself than I could ever be apart from her. Half the time she knew what I wanted better than I did myself. Love should not have been compared to shackles and whips, it was open doors and endless possibilities. I needed her back, I needed my freedom back.

Shannon: I needed to walk. I had to move. I needed to get away from the box that outlined the perimeters of my world. How had my life become so small?

I wasn’t walking to forget. I was walking to understand. The trail was the only place remote enough and quiet enough to cleanse my mind. Still, even in a place with no distractions I couldn’t escape the fog that surrounded my brain. I call it a fog because it stops me from doing what I want. Deep down I know what I want, but I stop myself from reaching for it. I distract myself with something else to make up for what I’m missing out on.

I don’t know if I let the fog control me because I don’t think I will succeed, or if the fog is just familiar to me. Maybe I’m afraid to give up my comfort-zone even though I know I can’t stay here. Freedom to me means leaving the hesitations and the haze behind.

Knowledge will be your character’s freedom.