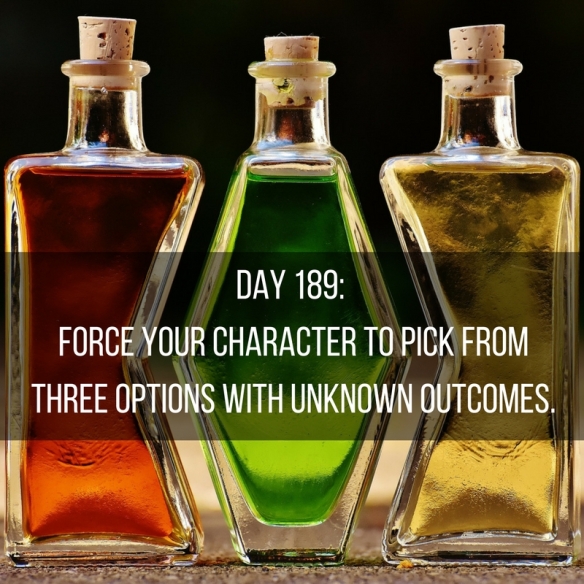 Day 189 of 365 Days of Writing Prompts: Force your character to pick from three options with unknown outcomes.

Erin: “You have it narrowed down to three. Now just pick one,” my little sister oversimplified.

“You don’t understand,” I argued. “I’m not just picking a school. I’m picking the rest of my life. This school will determine the job I get, the place I move, the people I meet, and all of the other endless things I will do for the rest of my life.” I nearly started hyperventilating.

“Just go with your gut, it will tell you which one leads to the life waiting for you,” she was always so sure of destiny. I wasn’t but chose to be at that moment, because it was easiest.

Shannon: “You don’t seem impressed. Don’t you like anything you’ve seen so far,” an older woman questioned from the other side of the clothing rack.

“I’m sorry, I don’t want to be ungrateful or criticize anyone’s fashion choices. It’s just, none of these make any sense for me. This is a very generous gift, but I don’t think I can accept it,” I pressed my teeth together, ready for her tell me to go to prom in a potato sack for all she cared.

She smiled, oddly pleased with my response. “Then maybe you’d consider playing a little game,” she offered.

“What kind of game?”

“I’ll show you,” she waved for me to follow and I did, more than intrigued. We went into a back room where she led me to one small clothing rack with three hangers holding up black garment bags. “I’ll let you choose from one of these, but you don’t get to see what’s under the bag before you choose. You must take a guess, and you have to wear it to your prom. As you agreed before stepping foot in the store, we do expect pictures. So, do you want to play?”

I hummed in thought, “Do I get any clues?”

“There was a necklace that came with each one. It’s in the pocket. I’ll let you look at those, but only if you play the game,” she explained, making the mystery even more exciting.

“Ok. I’ll do it,” I agreed before I could change my mind.

The first bag had a silver heart shaped locket necklace. The second one had a gold band with a emerald green jewel. The third had pearl necklace. “This isn’t real, is it?” I held up the last one and she nodded with another conniving smile. “Why would you just give it away? You could do so much more with it.”

“The lady who donated the dresses made it very clear. The girl who gets the dress also gets the necklace,” she explained. “So do you want that one,” she questioned.

I knew I should take the pearls. Even if the dress was hideous, I couldn’t regret the decision. “You’re probably going to think I’m stupid, but I actually want the one with the locket.” My heart was drawn to that one. I had always found lockets to be the most beautiful jewelry. They didn’t hold an eye-catching charm or instant elegance, but they do hold a picture of whatever a person loves most in the world and that’s worth more than any stone.

“I don’t think you’re stupid,” she moved forward to unzip the bag revealing intricate pastel blue and purple lace appliques covering the bodice and thinning out into a off-white skirt. “This one is actually my favorite,” she pulled it out and I was instantly in love. Tears flooded my eyes. I was having a hard time processing how something so beautiful could actually belong to someone like me. “Well go on,” she handed it over, “Try it on.”