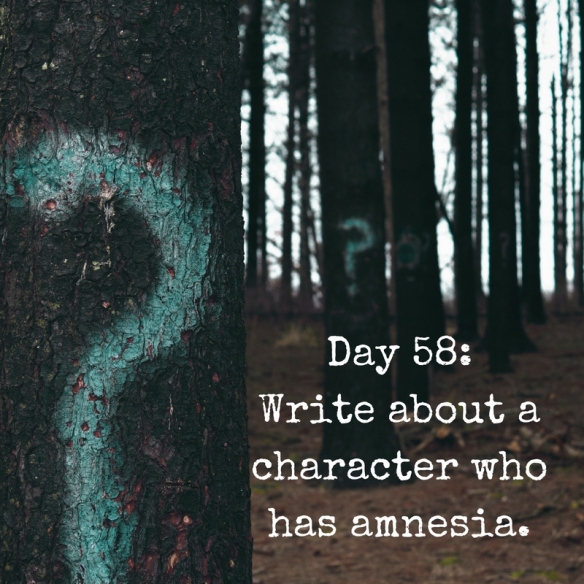 Day 58 of 365 Days of Writing Prompts: Write about a character who has amnesia.

Shannon: “Amber,” a girl came up to me in shock. “I heard about your accident. Why didn’t you tell me?”

She might as well have been a stranger. Memory is a tricky thing. You don’t realize how much you’ve relied on this power you have never seen, never felt, and never genuinely thanked until it’s gone. Like a pyramid of cans, I’m quickly witnessing what happens when you pick from the bottom row first. Everything comes crashing down. “I’m so sorry, but I had memory loss after the accident. I don’t remember you. I actually can’t remember anyone I met in the last five years.”

“I’m getting there,” I shrugged, “But it would be easier if I didn’t feel like I traveled to the future and woke up in a hospital bed. How do I know you,” I questioned, wanting to know who else knew me better than I knew myself.

“We were college roommates, we’ve been pretty close ever since. Well, until you disappeared,” she gave me a sad smirk. “My name is Kim.”

I’d seen her name in my phone a few times while I was in physical therapy. I tried so hard right away to gain everything back, but eventually had to give myself a break. It was draining. No one could seem to help. Not in a way that made it clear. It was only a fake fix. You can’t pass on memories. They don’t feel the same.

Erin: “Why do you keep acting like you have the hardest life in the world,” my brother asked asking to be slapped.

“I never said I had the hardest life, but my life has gotten harder,” I pointed out.

“Yeah right,” he cackled stealing the remote from me.

“What’s that supposed to mean. I’ve lost memories asshole. I’ve lost some of the best years of my life,” I stood up just about ready to strangle him.

“Lucky for you, I know what some of those best years entailed. The good and the bad. I’ll help you recapture the good without all of the tears,” he smiled.

“Yes, it will, but it’ll be fun,” he smiled at his DVD collection. “We’ll start by watching your favorite movie for the,” he air-quoted, “first time.”

You remembered to write today, good for you. Write about someone forgetting.