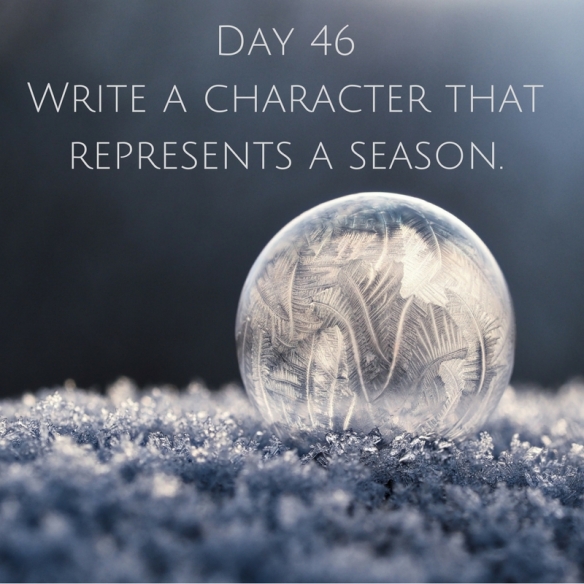 Day 46 of 365 Days of Writing Prompts: Write a character that represents a season.

Erin: Winter was impossible to pin. One day I would go up to her and she would ice me out completely. I’d ask her how her day was and she would just say “bad.” I would ask her if she wanted a cookie from the break room and she would just say “no.” Then other days her beauty would blanket the room and despite her constant scowl, there were days I couldn’t take my eyes off of her. She would say “good” and “yes” on those days. Days like that were usually dangerous, I would slip on my words and her chuckle would send me spinning out of control.

I understood why she could be that way. Her desk was covered completely in white. People were always dropping projects off for her and there was no way she could finish a page’s project before she got another ten. Her projects all revolved around children’s books, so she brought joy to so many others. Too bad that came at her expense.

It all changed at the same time of year though. She always had all of her vacation in one long four-week trip. To prep she basically lived in the office, until she turned on her out of office.

I never saw her during her vacation, but rumor has it, she is the most beautiful and warm person laying on the beach. When she comes back she still has a bit of that glow. Slowly though her desk will start to fill and her mood will start to chill. Her stress will build day by day, until yet again vacation will come around. From what I am told, that four-week span makes the rest of the craziness worth it.

Shannon: April was the type of person who could bring a little hope to even my darkest moments. To cheer me up she’d offer her warmth, but never ask me to completely forget about my memories of when it was cold. A much-needed conversation with her was both refreshing and unpredictable at the same time. I could never bring the same advice to the table, even though at times she needed it just as much as me.

She felt each emotion so deeply, so she never had a shortage of tears. She produced so many she probably could have used them to water her gardens of beautiful flowers. I think that’s where she found the most peace, just caring for them in the quiet. She wasn’t afraid of silence, because somehow she never felt alone. Now as I lie in her favorite spot, amongst everything she has grown, I realized she wasn’t.